Garrett Williamson is the vision of Elizabeth Garrett, born in 1831 on the Williamson farm on Bishop Hollow Road in Newtown Square, Pennsylvania.

Elizabeth was the daughter of Adam Buckley Williamson, a descendent of Newtown Township’s earliest settler, Daniel Williamson, who purchased the original 450-acre tract on September 24, 1692.

She married Casper S. Garrett of Upper Darby at her father’s house on March 3, 1853. Garrett owned and operated the Union Paper Mill on Darby Creek, as well as the “Paper Mill House,” which today houses the museum of the history of Newtown Township.

Elizabeth’s father later sold the Williamson property, but she was determined to have it back. Her husband purchased 212.75 of its original acres for her on December 6, 1877 from William Sheldon and Mary Thomas, for a total of $24,400. Elizabeth later acquired more acreage, bringing her holdings to 262 acres.

The Garrett Williamson Foundation is Established 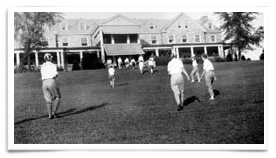 After Elizabeth died in 1910, she left her farm and all of its buildings and equipment to provide a vacation home “for the support and maintenance of poor children and deserving single women, as many as possible, so each shall remain for a limited period during the spring, summer, and fall months and shall be succeeded by others in the same manner.”

It was thought that the working girls were included because of her compassion for the girls who worked in her husband’s paper mill. The beneficiaries were to come from Philadelphia and other cities and towns where farm life was not known. The Main Lodge was constructed in 1916 to accommodate those beneficiaries so they could explore the vast property and work on the farm. Elizabeth stipulated that the farm be kept as always, “with a succession of crops in different fields, with flowers in suitable places, and with all the buildings, furniture and farm animals retained.” From architectural details of the buildings to land she fought so hard to maintain, much of Elizabeth’s legacy is still preserved. 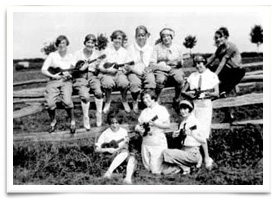 The will also stipulated that the Board of Directors could sell small portions on the outskirts of the property, if necessary, but must never sell the woods adjoining the creek, “as I desire the farm and its surroundings to be kept and preserved as nearly as possible in its present condition.” Currently, 242 acres of the original land is still much as it was over a century ago.

Garrett Williamson has been generous with the use of the facilities over the years. Classes were held in the Lodge when the Marple Newtown High School burned down in 1956. The Ellis School had some classes on the property over the years. A private school for Armenian children also leased the lodge in the early 1970’s. The Marple Newtown Recreation Commission also had an office here. 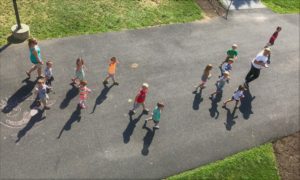 In 2017, Garrett Williamson officially transitioned from The Garrett Williamson Foundation to Garrett Williamson. The new public charity status allows the organization to better serve its population and maintain its mission as a non-profit. Garrett’s Way Childcare and Learning Center and Camp Garrett, officially established in the 1980’s, are premier educational and recreational centers for youth in Delaware, Chester, and Philadelphia counties that operate to perpetuate the vision of Elizabeth Garrett.

Senior citizens, churches, nonprofit organizations, and other outside groups use the facilities for picnics, social functions, and retreats. Garrett Williamson introduced their new Agriculture Department in 2021.

Garrett Williamson still has a charming reminder of this unselfish woman, who loved her childhood home enough to retrieve it and leave it for the enjoyment of those less fortunate. A poem in her own fine needlework, stitched when Elizabeth was 16, reads…

“We were made to work awhile,
Cheerful at our work to smile;
Thinking as we labor thus
Of the heaven prepared for us.”

We provide unique educational experiences that engage all children. Children will have access to a variety of enriching programs learning respect for all people & the environment.